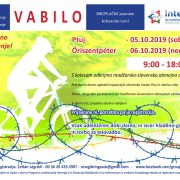 On Saturday, October 5, in Ptuj and on Sunday, October 6 in Őriszentpéter, you are kindly invited to the event “ICC Day – Cycling Festival” in the frame of the project “IronCurtainCycling”. 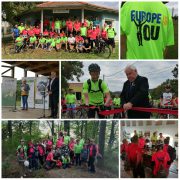 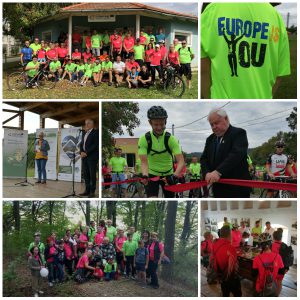 Páka, Hungary, 14 September 2019 – Under the auspices of the European Commission and the INTERACT program throughout Europe for the eight consecutive year, events are taking place at the European Cooperation Day. The events of this year’s ECday 2019 take place under the slogan “Europe is you”, whereby event organizers wish to emphasize the importance of the achievements of European regions and countries in cross-border cooperation. Projects implemented in this context have a significant impact on the quality of living of residents in border areas and bring long-term effects in the field of economy, tourism, cooperation as well as the preservation of the rich natural and cultural heritage. In this area, Slovenia has already with the neighbouring country of Hungary realized a number of successful cross-border projects, which form the identity of the border area. The first results of the co-financed project Iron Curtain cycling have been introduced to the participants of the cycling event in Páka. Which has been organized by the Government Office for Development and European Cohesion Policy, the Managing Authority for the Cross-Border Co-operation Program Interreg V-A Slovenia-Hungary in the period 2014-2020 in cooperation with the project partners of the Iron Curtain Cycling project.

A group of 250 participants from Slovenia and Hungary gathered in Páka, Hungary. The participants were welcomed by Dimitrij Pur, Head of the European Territorial Cooperation and Financial Mechanisms Office in the Government Office for Development and European Cohesion Policy and the Vice president of Zala County Mr. Csaba Bene, who also presented Iron Curtain Cycling Project. He emphasized that the project seeks to develop a complex CBC cycling destination through intertwining local, regional cycling routes connecting to EV13, being the main north-south axis of the region, and through developing cycling-friendly services and supplementary tourism supply with the aim to integrate the area into the international system of EuroVelo. 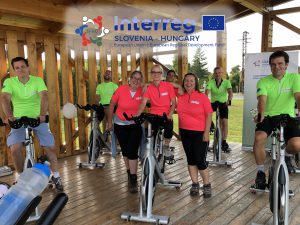 The participants then went for biking and hiking around the area between the Slovenian and Hungarian border. Cyclists were offered two tours, shorter 35 km and longer 80 km. The shorter distances led the participants from the Sports field in Páka to Szécsisziget– Lovászi where the first refreshment station was. After cyclists continue to Lentiszombathely with second intermediate stop and Csömödér, where the project GO IN NATURE was presented to the cyclists. A 80 km long tour led participants from Páka to Lentiszombathely with border crossing and first refreshmenst station in Dobronak / Dobrovnik, where project TELE-KA-LAND was presented. It was followed by cycling until the next stop on the top of  Lendava-hill with Hadik Chapel and cross the border to Tenkehegy, with second refreshment stop. Cyclists then return to Páka through Lendvadedes, Gosztola, Máhomfa  and Szécsisziget.

Hiker were also offered two guided walking tours, shorter 5 km and longer 15 km. The shorted distance was guided around the village Páka, visiting the Memorial House of Professor Öveges, traditional house in Dömefölde, bunkers and Roman catholic church. The longer tour was eco-touristic experiences along the Válicka stream. The participants got acquainted with the forests of Zala county, fauna and flora in the vicinity of the Válicka stream.

The event presented a nice opportunity to exchange experiences, opinions and, of course, socialize representatives of various institutions and the public

Dimitrij Pur, Director, Head of the Managing Authority, said that many cross-border projects are the result of cooperation between Hungarian and Slovenian partners, and today we would not have been able to carry out the event without cooperation and the Interreg program. Collaboration is the key to getting to know each other and building confidence in a cross-border area, and making us all mentally rich. Collaboration does not just happen, but it is built gradually. We are aware that there will always be common challenges beyond national borders, so there is no alternative to cooperation between neighbors. The Iron Curtain Cycling, GO IN NATURE and TELE-KA-LAND projects, which will be presented today, prove that participation in practice pays off, ensures project visibility and a greater number of visitors than if the activities were carried out unrelated, only on one side of the border. The purpose of today’s event is also to participate, and every year a larger number of participants prove that there is a strong preference for cross-border cooperation. For this reason, the cross-border program between Slovenia and Hungary is one of the most successful programs at EU level, by the use of funds. The cooperation agenda will continue over the period 2021-2027 and I believe that together we will come up with the most effective solutions to the common challenges of the cross-border area.

Pictures from the event are available here.

Short video of the event is available here.

News by Zalai Krónika about the event can be watched here.

News by Lenti TV about the event can be watched here. 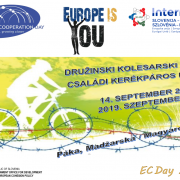 DO NOT FORGET TO REGISTER! JOIN US ON OUR FAMILIY CYCLING EVENT – REGISTER BEFORE 10TH SEPTEMBER 2019! 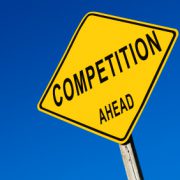 The Joint Secretariat of Cooperation Programme Interreg V-A Slovenia-Hungary (CP SI-HU) announces an open competition to apply for the title of SI-HU Best Project. The first submission deadline of applications is 30th September 2019.